The SkySphere – the kiwi bach of your tech geek dreams

Deep down on his parent’s Manawatu Farm, Jono Williams has been busy at work building the kiwi bach of his dreams. The Skysphere is the result of a chat over a few beers with a friend. After three years of hard work his solar-powered steel tower is finished.

The project was a labour of love, with Jono working on it in his spare time and on the weekends. He has documented the journey on TheSkysphere.com 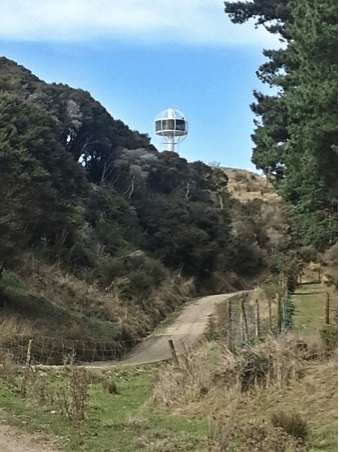 The Skysphere cost $75,000 to build and 3,000 man hours. Steel was custom forged in China, built to Jon’s specifications. Jono and his construction team (mates and ring-ins) put it together using hired cranes, farm equipment, and muscle power.

How do you get up there?

A journey to the top of the Skysphere isn’t for the faint of heart. The bach contains an inbuilt steel ladder in the centre of the tower. And if you want to take up your lunch? It needs to be in a backpack small enough to allow you to climb up the centre. 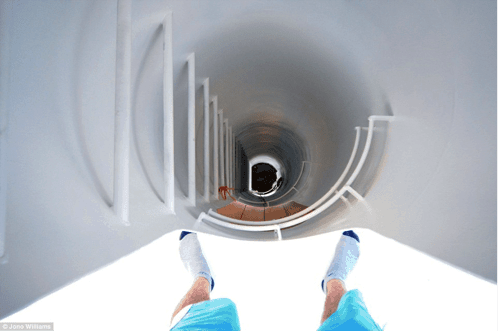 Not one to skimp on the details, Jono has installed an array of technology features to make life in the tower that much more fun.

There’s a large Miracast projector and screen – all solar powered – in the lounging area. 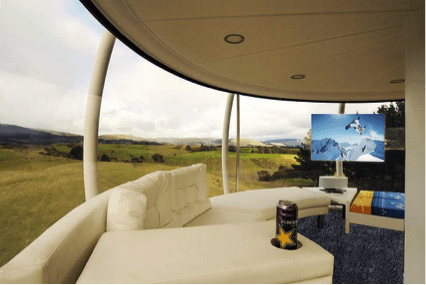 The custom couch, curved to suit the circular space, also features an automatic can dispenser and chiller.

Keeping this Skysphere his haven is important to Jono, that’s why he included a fingerprint scanner at the base of the tower. This way ensuring there were no intruders, or unwanted guests.

The LED lighting system is controlled through a smartphone app, and boasts a range of colour displays. 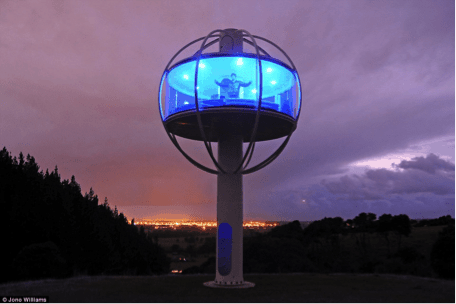 The entire sphere is controlled with Williams’ Android phone via a special remote control Android app he designed himself.

From his Android smartphone or tablet, he can; operate the mechanised door entry, alter beer chiller temperature, change the LED lighting, monitor the power usage and stored power, and control the audio visual components of his bubble in the sky.

After you’ve made the hike down the farm to the tower, and climbed the ladder to the top, you might need a rest. Jono’s got that covered with an inbuilt, custom Queen sized bed.

Despite all the high tech gadgetry involved in this monster project, the SkySphere does not have a bathroom. Jono says, lucky for him, he can just go off the side, but he can’t say the same for visitors.

This isn’t Jono’s first project. A few years ago he attempted his first build-a-bach project, building a deluxe tree house that boasted a hot tub and drawbridge. 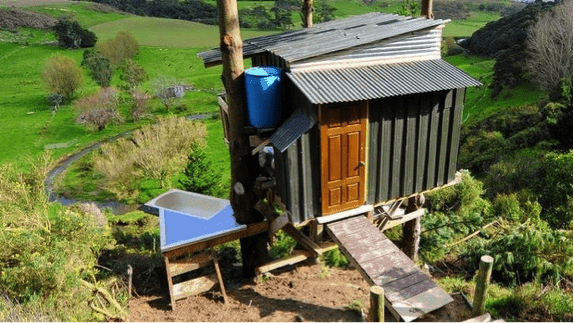 The gas heated hot tub is suspended over a steep hill, overlooking farmland and a stream below. Inside this ultimate hut you’ll find a sound system, LED lighting, a comfy sofa bed, and a heating system. 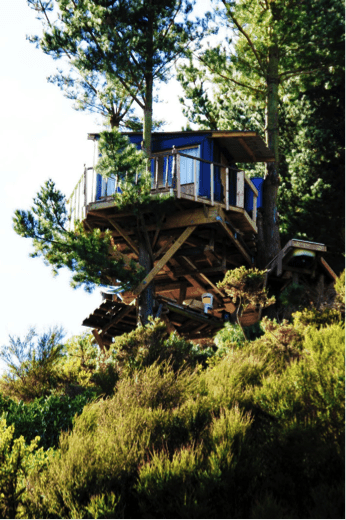 Where do I get my Skysphere?

We certainly can’t build you a Skysphere, but we can help you set up your new devices, whether it’s a laptop or projector. Or if you need wireless Internet set up for your sound system or home network then our Geeks can help. Get in touch today to get your digital entertainment sorted.